The image of a shool of kokanee seen on Garmin Sonar PS31 has been gathered a little, so I introduce it again.

1 How to read the screen ,and difference between sonar and traditional transducer

The PS31 is a forward-looking sonar that uses live view mode exclusively. The vertical axis shows depth and the horizontal axis shows distance in m. The screen on the far left is a screen directly below the sonar, and although it does not have the same resolution as the PS22, I can see what it is just below.

The white spots that radiate out over the entire screen are sonar noise. It will not come out if the sensitivity is lowered, but it will be difficult to search for kokanee in the distance.

Kokanee is recognized as a glowing point. In the flock, it becomes a lump, and the denser part becomes red black → red → yellow as it approaches the sonar.

The forward distance and the depth displayed on the screen can be freely changed by setting the fish finder. When I’m looking for a school of kokanee, I use a range of about 70m so that I can see a distant school of fish. This is changed to 40m when the school of fish approaches, so that the positional relationship with the kayak can be accurately captured. 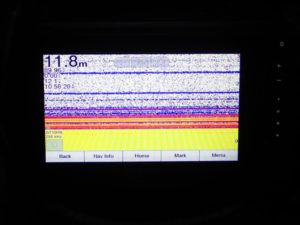 On a normal oscillator screen, the current reflected wave is represented by the line on the far right of the screen, and the main part in the center displays information about past reflected waves.

The sonar is also used by the tuna fishermen, but it is of the all-around exploration type. On the other hand, Garmin’s sonar is a type that searches in a certain direction.

It may be easier to understand if you think that it is the difference between the high-speed rotating radar and the non-rotating surface type radar mounted on the Aegis ships.

(1) School of fish swimming near the surface

It is a large school of fish on the north side of the intake tower, which I caught at the end of the latest April 11.

Last year, a large group of fish swimming near this surface appeared from late May to June. I think that it is a phenomenon that comes out when the surface water temperature becomes the most suitable temperature for kokanee as it gets warmer and warmer.

(2) School of fish swimming in the middle layer 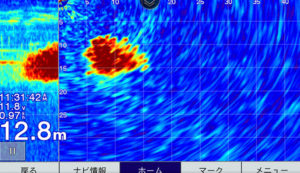 It is a school of fish that is often seen in early spring and after the second half of August. In early spring, it seems that not only small fish but also medium to large fish are in the same group of fish. The school of fish on the screen is found on April 4, with a depth of 7 to 17 meters and a width of about 10 meters.

Large schools also swam in shallow areas. The screen shows a school of fish found a little offshore in the area where many boats on the opposite bank were moored on the most recent April 11. I can see it swimming at a depth of 10 meters at a depth of 30 meters.

It is speculated that the school of fish seen in the fall probably re-assembled before the spawning. In terms of catching fish, there are a few small ones, but the impression is that they are mostly medium to large.

The screen is also a school of fish caught in the fishing line last April 11th, and it is about to join the schools that swim around 15m and 25m.

In the lake, the fish schools do not have the same shape from beginning to end, but it seems that two schools are joined together or one school is split.

3 Screen of small and medium-sized school of fish

As the weather gradually gets warmer, large schools of fish decrease, small fish mainly form medium-sized fishes in the middle layer, and medium to large-sized fishes form small groups of fish and swim in shallow layers of 5-10m. I will. 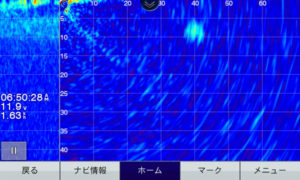 The screen is a medium-sized school of fish found around the depth of 8m and 40m ahead, which was found during fishing on April 11. With PS31, I can catch a school of fish in front of about 50m (up to about 70m), but at first it looks like a group of bright lines like this. 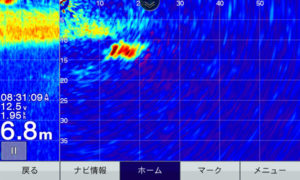 This screen shows a school of medium-sized fish caught in September of last year, swimming at a depth of 12m, approaching 10m from the kayak. You can see the color of the school of fish, which was visible as a white line in the distance, changes color as it approaches.

As with large-scale schools, some schools swim in shallow areas near the shore. On the screen, you can see that there is a group of fish swimming near the depth of 12m found on the east side of the exit in September of last year, and a small school of fish also continues in the back.

Garmin Sonar PS31 makes it possible to grasp the appearance (size, depth, distance) of a shool of kokanee in the water. I think that it is the best tool for tracking kokanee that swims irregularly and rapidly in the middle layer of the lake. 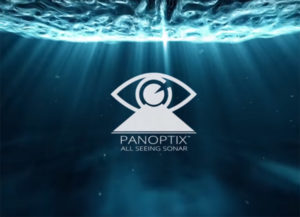 Garmin’s outspoken phrase is PANOPTIX “ALL SEEING SONAR”, so I think it has the function as its name implies. The Panoptix series also has a much higher resolution and the much-loved Livescope, but I think the PS31 is enough for kokanee fishing. 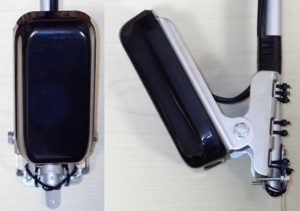 In my fishing method, without PS31, I can’t catch kokanee at all. In the unlikely event of a failure on the lake, give up fishing for the day and return. 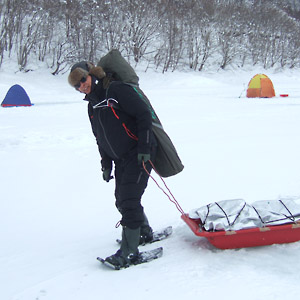